The Problem of Evil

Experience has shown that discussing the Problem of Evil will tie up any believer for an hour or more. In the interest of saving our time, the typical conversation has been flowcharted below: 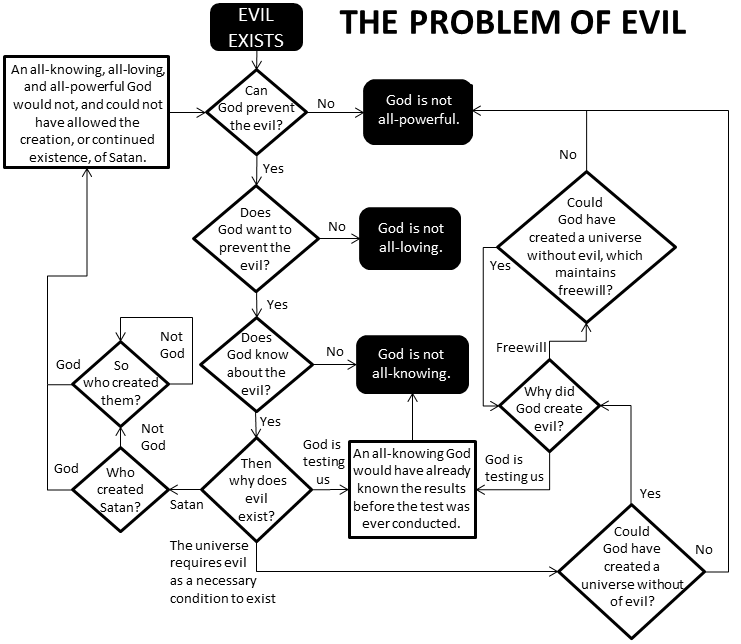 Please review this image until you have fully grokked its contents. The flowchart has been optimized to fit on a single sheet of letter-size (A4) paper. The background was kept white to avoid straining your printer, at the expense of this page’s aesthetics. If you save this image, be sure to keep it in lossless PNG format, to prevent JPEG artifacts from blurring the text.

God performed miracles to save the Jews from the Pharaoh, but not from Hitler. The inability to explain why an all-powerful, all-knowing, all-loving God sat on his hands and allowed the Holocaust to occur is now a major sticking point in theology. How could anyone have any kind of faith after the Holocaust? Holocaust Theology is the greatest problem which the tumultuous 20th century has imposed upon philosophers and theologians. Multiple theodicities have been, and are being, developed to explain Holocaust Theology, but to no avail. Even if a Holocaust Theology could be devised, it would not be a theology of hope. Offering a paradise after death as a means of escape from a despised world which was ruined and wracked by privation, violence, and all forms of cruelty is not a theology of hope -- it is a theology of despair.[1]

This is compounded by the fact that God freely admits to being evil (ISA 45:7), and has condoned previous genocides (EXO 34:11-13). Even if answers could be found, it would still be “wrong” to punish any person or group associated with those crimes against humanity, since compliance with Christ’s maxim of “judge not lest ye be judged” requires completely abandoning jurisprudence, on a conceptual level.[2]

Resolutions to the Problem of Evil

The Problem of Evil has been approached from many angles, and each one has been developed in extreme detail. These counter-arguments fall into two classes -- and Christians find neither of them palatable.

The existence evil is inconsistent with the existence of a being with all three attributes of the God of Abraham (i.e., all-knowing, all-powerful, all-loving), but it is consistent with a being that only has two, or less, of these attributes. God can exist, but not “as-advertised,” because he is a “lowercase-g” god. A God with limitations is the best explanation, as it also handles the additional constraints imposed by the Omnipotence and Omniscience Paradoxes, as illustrated in the truth table below:[3]

Type-1 gods are tragic, saintly figures who genuinely want to invoke positive change, but lack the means or ability to do so. While they may have great knowledge (like Cassandra) or great power (like Odin preparing for Ragnorök), these will ultimately be insufficient.

Type-2 gods are not all-powerful, all-knowing, or all-loving; they cannot truly be considered gods per se, as any and all humans also meet this criterion. If beings with immense knowledge or power existed, it is unclear why anyone would want to worship them, as their literary counterparts tend to be:

The Non-existence of Evil

Unwilling or unable to accept the conclusions drawn by the Problem of Evil, the Christian's only recourse is attacking the underlying assumption that the argument rests upon, and deny the existence of evil.

Apologists speculate that God has a divine plan, which is good; and isolated parts of this larger plan for overall good are misidentified as evil because human cannot see or grok the big picture. Therefore, the concept of evil does not exist, and everyone and everything is objectively good. While humans may perceive genocide (DEU 13:15), slavery (EPH 6:5; TIM 6:1), and ordering bears to maul children (2KIN 23:24) as evil, it is because humans are just unable to see the objective good in these allegedly evil acts. This is because divine morality differs from human morality, and what is "evil" for humans may not be evil for God. According to the Divine Command Theory, anything God does is de facto good, regardless of its context or consequences. Therefore, the concept of evil cannot apply to God, for any reason. Although it is wrong for man to violate any of God’s laws, God is can do so on a whim, maiming and killing innocents in natural disasters (“Acts of God”) and untimely deaths (“God’s will”).[4] If a priest attempts to use this line of reasoning, by all means, let them. This is golden opportunity of a lifetime; draw as large of an audience as you can, because the clergyman will say something that compromises their credibility. Arguing this viewpoint is a de facto endorsement of moral relativism or moral nihilism. The case for biblically-approved moral relativism is strong, based on how God keeps changing his rules. To deny the existence of evil is to defend every form of physical, mental, financial, sexual, social, political, and economic abuse; this places the clergyman in the bewildering situation of painting themselves into every corner, all at once.

While some apologists, like Gottfried Leibniz, argued that humans are unable to discern good from evil, since mankind’s limited experience prevents us from judging the overall state of the universe. However, this is a non-sequitur, since our limited experience tells us that evil can and does exist on a local level (e.g., selling heroin to orphans). Again, God explicitly admitted to creating evil (ISA 45:7); and feeling horrified by any of God’s conduct in the Old Testament implies that morality exists outside of God.

Experienced apologists (i.e., those who’ve touched this metaphorical stove before) re-frame the Problem of Evil as "the Problem of the Absence of Good." However, this is fruitless, as an all-knowing, all-powerful, all-loving God would still be prompted to intervene. This is compounded by the fact that there are situations where good can exist without evil. Buying toys for children is good, and not buying them toys when they have a playroom full of them is not evil. Evil is unnecessary to understand good. Children understand that having toys is good, even without the experience of not having toys.[5] A person who does not rape and murder is not considered virtuous for meeting minimum baseline expectations.